The Power Rack And The Power Pill 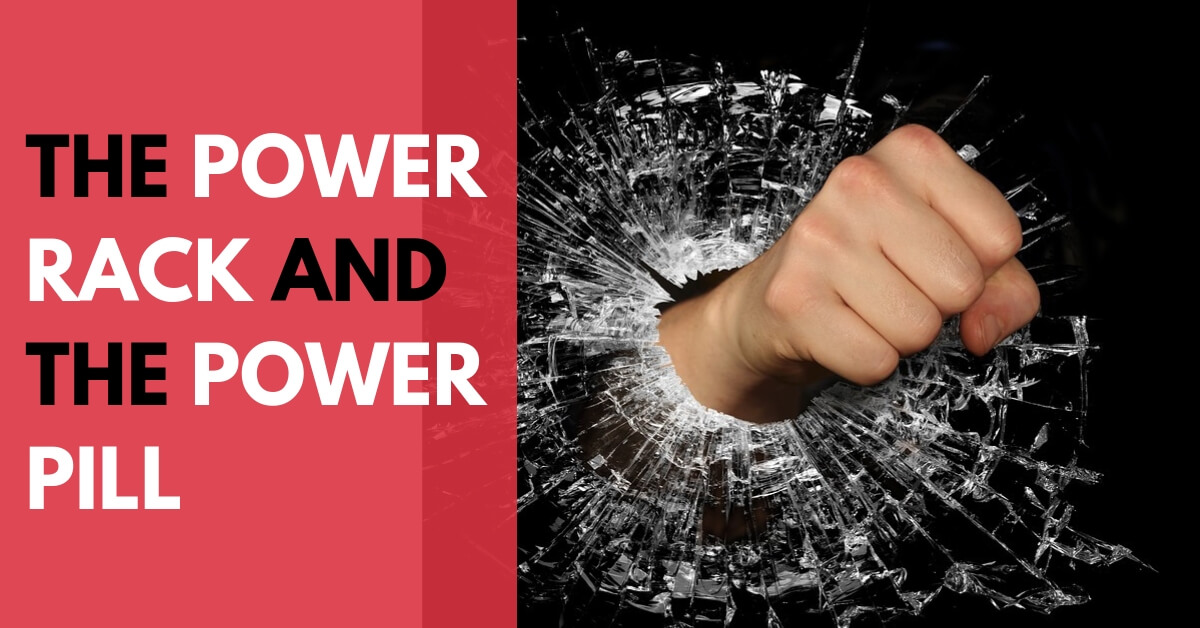 Walk into any gym and what comes to mind: fake boobs, synthol arms, lipo six-pack, calf implants, or “that guy’s juicing, for sure!” We all do it. You may not say it out loud, but you know you’re thinking it.

Implants, synthol, and liposuction are rather recent innovations, but steroids have been around for a while and they’ve been instrumental in building muscle and training equipment. Yes, that power rack in your gym is a result of steroids. It’s true!

When Milligrams Turn Into Grams

Let’s face it, steroids have been used in sport for decades. Fact is, many athletes have not only used the stuff, they’ve “abused” the stuff and that’s especially true in bodybuilding. Pick one of the top guys over the past 50 years and it’s likely that they were on buckets (not droplets) of the sauce!

In a fantastic interview conducted a few years ago on the Iron Radio Podcast, world-renowned nutrition and sports medicine expert Dr. Mauro Di Pasquale claimed that the amount of steroid use in the ‘70s and ‘80s by bodybuilders was simply “unbelievable!” He knew of a competitor who downed an entire bottle of Dianabol at each meal – that’s 100 tablets each bottle, 3 times a day, and that’s on top of probably 2,000 to 3,000 mg a week of injectables!

Some of the top Mr. Olympia contestants back then would take as much testosterone in a month prior to competition as the average male would produce in a lifetime! Forget about a few hundred or even a few thousand milligrams, some of these competitors would go as high as 10 grams of anabolic steroids a week!

Today things have gotten a little out of hand in bodybuilding and its popularity has dropped tremendously. The physiques are unrealistic now and quite frankly not that attractive – guys just can’t relate to them anymore and according to Randy Roach, author of Muscle, Smoke & Mirrors, it’s one of the main reasons why mixed martial arts (MMA) has become so popular. That’s a physique that guys can relate to and that’s what they want to look like. Being able to kick the crap out of someone (i.e., functional strength) is an added bonus!

And if you look at the women’s side of things, you now have so many different levels of bikini, figure, fitness, and physique competitions stemming from a low amount of muscularity to an extremely high degree of muscularity. What’s one of the major differences in preparing for each level?

The amount of drug use.

Too Much Muscle Mass is Dangerous

When I posted the video Models Are Fat! a few years ago, I knew it would be controversial, but the controversy had nothing to do with models. The line “too much fat or fat-free mass can be detrimental” was not taken lightly, so to speak. Apparently, most hardcore lifters cherish muscle and lots of it. In their minds, there is nothing wrong with being as BIG as humanely possible.

Well, being muscular is not a problem, but a “heavily-muscled” physique may be a problem. There is an optimal amount of hypertrophy that should be acquired for any endeavor (i.e., occupation or sport). Too much mass, whether it’s coming from fat or muscle, can indeed be detrimental. It places a great strain on the body and can decrease longevity, particularly if a genetic predisposition to cardiovascular disease exists.

As Harry B. Paschall pointed out in his 1950 book Muscle Moulding: “Every pound of flesh you put on means the addition of hundreds or thousands of tiny capillaries to carry blood to nourish this flesh, and thus gives the heart and lungs and stomach and liver and kidneys more work to do. Get too fat and any insurance company can prove to you that you are sacrificing a good many years of normal life. Muscular ‘lumps’ of the showcase type may be just as fatal as fat.”

The amount of muscle mass that is “safe” will vary among individuals and I believe that most recognize by instinct once they’ve crossed that threshold. The body and its systems are “weighed down” beyond a certain point.

At 5’10″, I’ve been as high as 225 solid pounds and it was too much for me. I felt heavy, slow, and uncomfortable. My weight may fluctuate 5 or 10 pounds depending on what phase I’m in, but for the most part I hover around 200 pounds now where I feel strong, fast, lean, functional, and most important… healthy!

A “heavily-muscled” individual who’s under 6 feet in height and weighs close to 300 pounds (or more) may be at risk if they carry that weight too long. Drugs will only compound the issue and if a genetic predisposition to heart disease exists, they may be a walking time-bomb!

In the strength world, we’ve lost many legends like Anthony Ditillo and Anthony Clark, and there are too many bodybuilders to mention that have left us before their time. If being “too big” does not increase mortality, it will definitely increase morbidity, something I learned from functional medicine expert Dr. Robert Rakowski back in 2006.

So taking heavy doses of steroids can obviously have drawbacks and for those that have done it, they know what it can do to your connective tissue. Muscles get big and strong, but often the connective tissue just can’t keep up. You’re a rupture waiting to happen!

But what about “sane” amounts like those used in testosterone replacement therapy?

Get an experienced 40- or 50-year old lifter on some Androgel or Testim and you’ll be quite impressed with the results, but we’ll leave that discussion for another time.

Whether you are for or against steroids, you can bet that your training has been influenced by them!

In a great paper published in the Journal of Sport History (Spring, 1993) titled “Isometrics or Steroids? Exploring New Frontiers of Strength in the Early 1960s,” author John Fair laid out a very compelling argument that “the greatest system of strength and muscle building the world has ever seen” was not isometrics as Bob Hoffman was promoting to his Strength and Health readership, but rather steroids!

Around the middle of the 20th century, Bill March and Louis Riecke were two American weightlifters making incredible progress using a new system of training that involved pushing or pulling a barbell as hard as possible for 6-12 seconds against pins set in a power rack. Under the guidance of Dr. John Ziegler, these two athletes made great gains with isometrics, but they were also secretly using another new advancement: the anabolic steroid Dianabol.

As Bill Starr mentioned in a paper “Isometric Farce” printed in the June, 1972 edition of his Weightlifting Journal: “Hoffman, knowing that he could not capitalize on the sale of steroids, jumped in the slot with his isometric courses and equipment… Hoffman made a mint… as lifters throughout the world pulled and pushed hoping to get as strong as March and Riecke.”

Unless the isometrics were accompanied by those little pink pills, those incredible feats of strength were never replicated. As a training system, isometrics never really amounted to much, but steroids were gaining quite a bit of “behind-the-scenes” popularity. And the power rack, well, it became a household name.

Now, fast-forward to the “Colorado Experiment” conducted in 1973 where Casey Viator gained an incredible 63.21 pounds of muscle in 28 days. Granted, Viator did not train for 5 months beforehand and dieted hard the previous month and a half to make the results more dramatic. Furthermore, he was offered a “healthy cash incentive” for every pound of muscle he gained, but he was by no means a beginner. And no matter what type of genetic specimen Viator may have been, you don’t gain that much muscle in that little time, naturally!

How did he do it?

By force-feeding, high-intensity training (HIT), Nautilus equipment, and some speculate that steroids were used. (You think?)

As a result, HIT gained some followers and Arthur Jones and his Nautilus equipment made a fortune! As Bill Pearl mentioned in his book Getting Stronger: Weight Training for Sports, “Nautilus machines became so popular during the ‘70s and early ‘80s that it was said that more money was spent on Nautilus equipment than on all other commercial gym equipment being sold at that time.”

You may not see too many of the original Nautilus machines any more, but if you go to any serious gym, you will definitely see a power rack. Now you know how it got there!