The Muscle-Building Discovery For Solid Calves 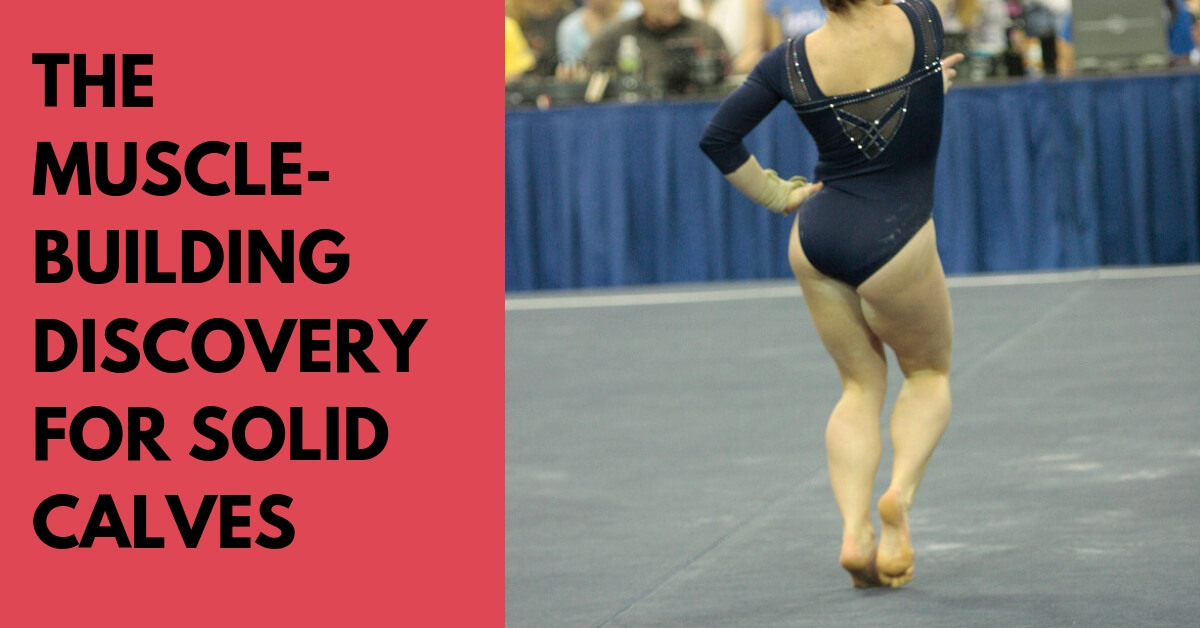 In my small home gym, I have three dedicated machines for calf training: a standing calf raise unit that goes up to 600 pounds, a seated calf raise machine, and a step platform equipped with a handle for one-leg calf raises. These are the sort of machines that you see in large commercial gyms, but usually not in a smaller home-based setup. So why do I have them in mine? Simple, my calves suck and I need all the artillery I can get my hands on, or in this case, feet on!

After years of hard work using all kinds of techniques – including drop sets, negative-accentuated training, explosive movements, extended sets, burns, supersets, trisets and giant sets, escalating density training, tempo manipulation, plyometrics, unilateral training, you name it – the gains have been minimal. Adding calf size has been a struggle! That was until I made a very interesting discovery…

My daughters are competitive dancers and I get to watch them compete a few times a year. Dancers have nice, aesthetic physiques. They’re in great shape. Most bodybuilders, however, would consider them a bit small for their liking. That’s fine, but dancers have some serious calves and they can compete with many bodybuilders in that area. In fact, bodybuilders can learn quite a bit from dancers on how to train calves. I know I did.

What’s the dancer’s secret for well-developed calves? It’s simple, they’re constantly on their toes. It’s repetition after repetition for them and they end up with solid calves as a result. Check out this video:

I decided to try an experiment. I did 100 reps of bodyweight calf raises every day for a month to see what would happen, and boy was I impressed with the results. If you’re not convinced that this type of bodyweight training will do anything for muscle size, try performing 100 reps of chin-ups or dips every day for a month and let me know what happens. My colleague Chad Waterbury, a guy who knows a thing or two about hypertrophy, has written about this concept in the past and believe me, it works!

Remember, success leaves clues. If you want to build a nice set of arms and shoulders, train like a gymnast. For glutes and hamstrings, train like a sprinter. For calves, well, train like a ballet dancer! I know what you’re thinking, but before you smash your fist through the computer, hear me out…

The calves consist of many muscles, but the two primary workhorses that most bodybuilders are concerned with are the gastrocnemius and the soleus. We all know by now that the gastrocnemius receives more stimulation with the knees extended (standing calf raise) and the soleus with the knees bent (seated calf raise). We also know that the soleus has a greater slow-twitch muscle fiber makeup (up to 88%, one of the highest slow-twitch compositions in the human body) and thus, higher reps should be performed. But are the reps generally high enough in training for this “endurance” muscle? And even when the knees are extended during a calf raise does it mean that the soleus is not receiving any stimulation? The answer is “no” on both accounts.

A decent amount of volume at a decent intensity can result in a decent amount of hypertrophy. Lifting a substantial load, like pretty much your entire body weight, for a high number of reps will definitely put on muscle. That applies to any body part, not just your calves. I’m sure if you did wrist curls with the equivalent of your body weight every day for a month, your forearms would blow up.

Since you’re not using huge loads, this form of training can be accomplished daily, and it’s the frequency that will coax your body to adapt quickly. You’ll be sore initially, but it won’t be that bad. Even though you may be used to much higher forces from a regular assault of barbell jumps (the acceleration end of the force equation) and heavy standing calf raises (the mass end of the force equation), this is a novel stimulus that can induce some novel soreness along with some novel results.

Not only is the intensity, volume, and frequency different than what you normally do for calves, but the range is likely different as well. We’ve always been told to perform a full range of motion when training calves. In fact, many experts advocate that you emphasize the stretched position. For someone who has difficulty performing a full squat, this is very good advice. If you automatically lean forward and/or your heels raise when you squat, then you need to stretch those calves out. But what if you’re one of those guys that can full squat no problem with a nice upright trunk, your knees can easily pass your toes with your heels flat on the ground? Doing some partial training (i.e., emphasizing the top, contracted position) may be exactly what the doctor ordered for those calves!

You can put as much as half an inch or more on your calves in one month with this method. However, you must be consistent every day. Get into a routine. I suggest that you pick one time of the day and stick to it. Remember, it doesn’t take much to do. Literally, no material items are required – no machines, no shoes, nothing, just a bit of effort.

Here’s how it works. Start with 50 reps of heel raises and work up to 100 reps with just bodyweight alone. Do that every day without fail for a month. You’ll be amazed at the growth and definition that you’ll acquire and as a bonus, your balance will improve as well. Actually, consider this as a form of prehabilitation for your ankles. It’s particularly useful if you play any recreational sport and are plagued with constant ankle sprains.

I know it seems simple, but proper form is very important. Situate your feet about shoulder-width apart and slightly toed out. Concentrate on raising the heels straight up as if they’re puppet strings being pulled up by God himself. Make sure to contract hard at the top; think of a double biceps pose, except you’re squeezing the hell out of your calves. Don’t hold on to a wall or machine for support. I don’t want you to deload in any manner and I want those small stabilizers to grow as well. Just keep your arms at your sides or your hands on your hips while you do this. It might seem like a joke at the beginning, but trust me, after a while, your calves will be on fire!

You must be in bare feet (no shoes). Make sure to raise the heels as high as possible and distribute your weight evenly over all your toes. Hold the top, contracted position for a full 2 seconds. It must be a definite stop at the top and you want to feel a peak contraction in the calves, then control the lowering. Don’t drop like a bomb! If you don’t stop at the top and lower under control, the rep doesn’t count! It’s that simple. They must be quality repetitions in order for you truly reap the benefit of this type of training. The prime movers will get hit, but so will all those little stabilizers and in the long run, it will make a BIG difference in the overall growth of your calves.

You’ll need to invest up to 10 minutes a day for a good month to truly reap the benefits of this method. Consider that each controlled repetition should take 6 seconds (2 seconds up, 2 seconds at the top, and 2 seconds down) and you’re performing up to 100 reps per day. That’s 10 minutes.

Once you’ve gone through a full month of this, throw on an additional 10 or 20 pounds using a weighted vest and go at it again. (Some guys will need to do this sooner if they find it easy after a couple of weeks.) Keep building up until you reach a level of development that you’re satisfied with and then you can maintain with 2-3 sessions a week. Even just one session a week will do the trick if you return to machine work for your calves, which you’ll likely welcome to break up the mental and physical monotony.

I had gone about the war on my calves in the wrong fashion. Instead of more weapons, I actually needed less! All these machines really aren’t necessary. Heck, you don’t even need shoes. Just a bit of time, patience, and lactic acid tolerance, and you can transform those young, immature, and disproportional calves into solid, full-grown cows that are up to par with your other body parts.