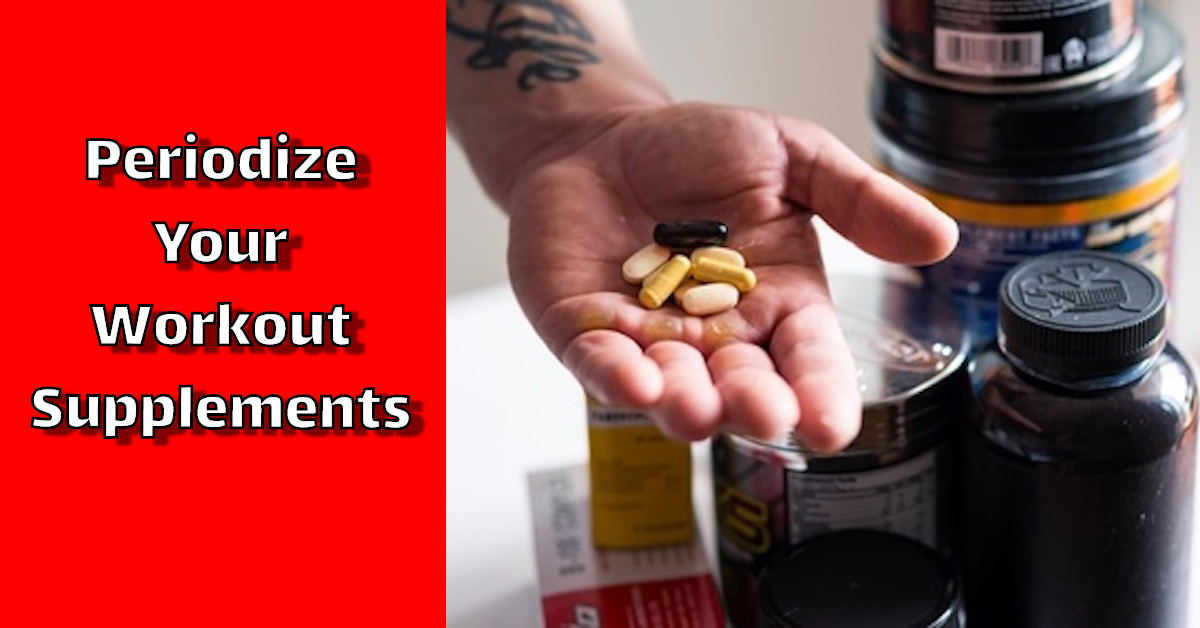 Of course, your nutrition should vary as well to accommodate the energy demands – fewer carbs are necessary during intensive phases and more carbs during extensive phases.

That’s great, but what about supplements? Shouldn’t they vary as well?

A great way to periodize, or vary, your pre- and intra-workout supplements for maximum sensitivity and effectiveness is to use nootropics, like alpha-glycerophosphocholine (alpha-GPC) and acetyl-L-carnitine (ALCAR), along with branched-chain amino acids (BCAAs) near the beginning stages of a routine, and then switch to caffeine and highly branched cyclic dextrin (HBCD) toward the latter stages.

If you change your routine on a monthly basis, for instance, simply wave between those supplement combinations every two weeks so that you stay sensitive to them. They’ll work better for longer in that manner.

Nootropics are great when maximum concentration is necessary, and there’s no better time to use them than when starting a new routine. You don’t need a ton of physical energy at the beginning since the loads are lighter. What you need is “mental energy” to concentrate on form. Get your technique right – don’t mess that up with stimulants.

Stimulants should be used when you need a real kick. Bring them in on peak workouts toward the end of a routine when the greatest loads will be used. You’ll welcome the extra boost! That’s where caffeine enters the picture.

Not only will caffeine give you that kick when you need it the most, but research from the University of Georgia shows that it can reduce post-workout soreness by almost 50%, and using caffeine for only half the workouts a month helps maintain its effectiveness while reducing any negative side effects.

Without a doubt, BCAAs are one of the best supplements to take during a workout. They have a host of research-supported benefits, including stimulating anabolism, deterring catabolism, preventing mental fatigue, and providing energy, endurance, and an increased rate of recovery.

Along with their unique anabolic and anti-catabolic effects, the most valuable aspect of BCAAs is their ability to reduce post-workout soreness, especially near the beginning stages of a new routine. You may not appreciate this at the time, but you will afterward!

For maximal muscle mass gains, a minimum of 20 grams of BCAAs should be taken during a workout – anything less and you won’t get the desired effect. If money is an issue, use them on lagging body parts only. Take the BCAAs in evenly divided doses between sets.

Strength is one thing, energy is another. If you find yourself gassing out early on a consistent basis during your workouts (a common scenario for many near the latter stages of a routine), try HBCD. Sip this stuff between sets and you won’t believe what it does to your stamina.

When it comes to post-workout supplementation, the one that reigns supreme is creatine monohydrate. In fact, creatine monohydrate is the most researched sports nutrition supplement in the world. There are close to 400 studies listed on PubMed right now and about half of them deal with muscle and exercise performance. A review of the literature by the International Society of Sports Nutrition states that “creatine monohydrate is the most effective ergogenic nutritional supplement currently available to athletes in terms of increasing high-intensity exercise capacity and lean body mass during training.”

Creatine should be cycled though, and contrary to popular belief, it doesn’t require a loading phase. Taking 5 grams of creatine monohydrate after every workout will saturate muscle cells within a month. The washout period is around four weeks before levels reduce down to baseline. Therefore, cycling on creatine for one month during an extensive phase and cycling off creatine for one month during an intensive phase results in greater positive effects and fewer negative effects in the long run.

Why take creatine after a workout, not before it?

Many people complain about cramping when using creatine. This is usually remedied with proper hydration, but an important point to remember is to always take creatine after your workout, never before. Not only does it help prevent cramping, but according to Antonio & Ciccone, 2013, “consuming creatine immediately post-workout is superior to pre-workout vis a vis body composition and strength.”

Something I learned from a professor of mine, Dr. Tudor Bompa, is that creatine is excellent for muscle hypertrophy, but don’t take it during a power or maximal strength phase. By increasing the fluid volume of the muscle cell, you decrease neural drive and thus decrease speed. In the steroid world, methandrostenolone (Dianabol) increases fluid retention while stanozolol (Winstrol) increases neural drive. Many sprinters favor Winstrol for this reason.

What about post-workout during an intensive phase then?

Take a page from fellow strength and conditioning coach Christian Thibaudeau on this one, and use a neural potentiation formula after your workout to increase central nervous system recovery. These supplements will help increase levels of key neurotransmitters like dopamine and acetylcholine that were depleted during the workout.

Bottom Line: Make sure to periodize your nutrition and supplementation as well as your training for maximum results.