Olympic Lifting For Athletes: What Do The Experts Say? 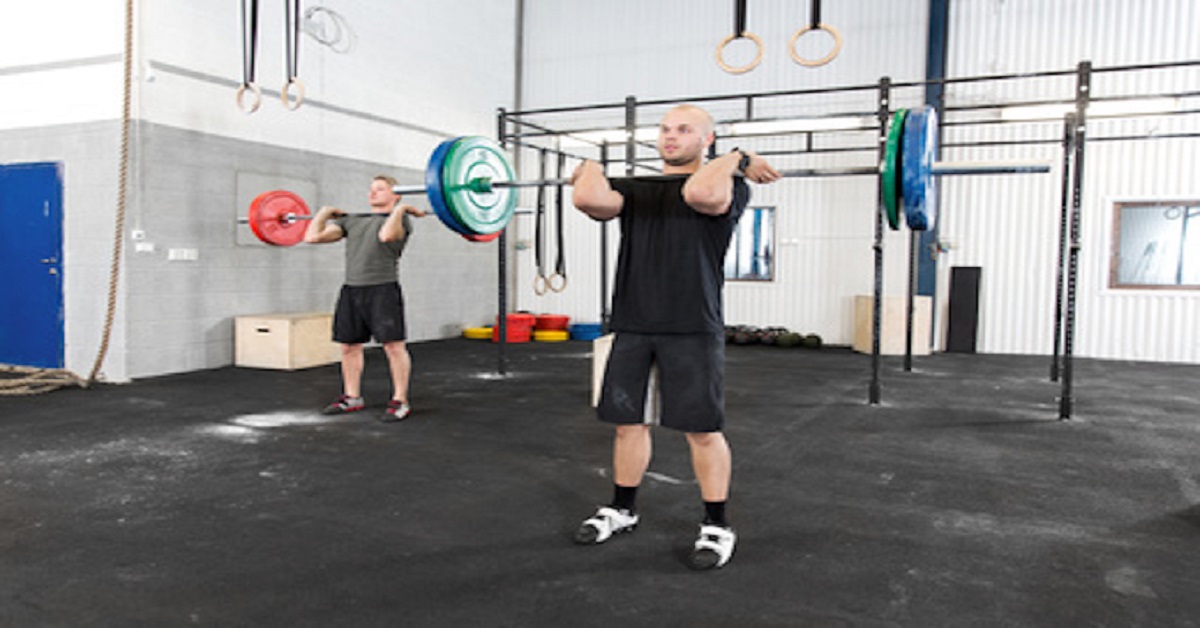 On page 81 of The Elite Trainer, I discuss a controversial topic in strength training. That is, are Olympic lifts necessary to improve athletic performance in sports other than Olympic weightlifting? Let’s take a look at what some of the experts say on this subject.

“For decades coaches have argued about whether Olympic lifting is mandatory for athletes seeking maximal power production. Some coaches are strong advocates of Olympic variations based on the premise that Olympic lifts produce much higher power outputs compared to the powerlifts (Garhammer, 1993).

A recent study examining 23 powerlifters and rugby players showed that deadlifts at 30% of 1RM produced 4,247 watts of power (Swinton et al., 2011a). This is slightly less than values reported by the same researchers in another recent study, which showed that peak power in a straight bar deadlift was 4,388 watts (at 30% of 1RM) while peak power in a hex bar deadlift was 4,872 watts (at 40% of 1RM). In fact, some individuals were able to reach values over 6,000 watts in the submaximal deadlifts (Swinton et al., 2011b).

The Olympic weightlifting versus powerlifting debate will undoubtedly continue to rage, but this emerging research should provide some interesting fuel to the equation. Considering the available research, it appears that dynamic effort hex bar deadlifts with 40% of 1RM can match the Olympic lifts – including the power clean – in peak power production.”

Another reason I feel the Olympic lifts are overrated is that they take a long time to teach and most athletes are horrible at them. After all, Olympic lifting is a sport in and of itself! Olympic weightlifters spend their entire lives practicing these lifts and some of these athletes still never perfect them!”

“I often wonder if performing the Olympic lifts in the training of football athletes, as well as other athletes, actually transfers to better playing on the field. It does not appear to be so. It seems that everyone assumes that this is what occurs, but nobody has proven this point. In addition, it appears that many powerlifting programs also utilize Olympic lifts in training. However, is this a wise idea? Has anyone proven that this truly benefits powerlifters or power athletes?”

“I’ve been very outspoken in the past about how I am completely against the inclusion of Olympic lifts in baseball strength and conditioning programs because of injury risk and the fact that I don’t believe the carryover in power development is as good as many folks think. I’ve taken a lot of heat for it, too, as it’s essentially blasphemy for a strength and conditioning coach to not think the Olympic lifts are a “Holy Grail” of performance enhancement.

Truth be told, I think there is merit to the Olympic lifts for a lot of athletes and general fitness folks. However, baseball players aren’t like most athletes or general fitness folks. They have far more joint laxity, and it’s a key trait that helps to make them successful in their sport. While I hate to ever bring additional attention to an extremely unfortunately event, a weightlifting injury that occurs in this year’s Olympics reminded me of just one reason why I don’t include the Olympic lifts with our throwers…”

“These coaches hand out these bigger-faster-stronger programs for these kids and tell them to do power cleans. I had seven quarterbacks last year with sprained wrists because they don’t know how to do power cleans. We have all these personal trainers running around America thinking they know how to do it but they don’t. They don’t know the difference between a reverse curl and a clean. And we have to get the old guys back just to teach these kids how to lift weights because they are all hurting themselves.”

“I know I’m going to catch some flak [from] some of the internet haters and gurus out there, but I’m going to say it anyways. Point blank: I know my limitations as a coach. I don’t have a lot of experience with the OLY lifts personally, and I just wouldn’t feel comfortable pretending otherwise. That said, it doesn’t make much sense to me to spend an inordinate amount of time coaching/teaching something I don’t have a lot of familiarity with…

There are other, more “user friendly” ways I can train power and explosiveness…

Teaching and coaching the OLY lifts (well) can easily take months to accomplish, and if I only have a limited amount of time with someone I have to be overly judicious with my time with them.

With that I tend to opt for med ball training, skipping drills, heidens, sprint work (when applicable), and the like to get my “power” training in.

And not to blow sunshine up my own arse, but I feel the results that I (and the rest of the CP staff) have been able to accomplish speak for themselves…

Hopefully I didn’t offend anyone or cause someone to blow a gasket. Just to reiterate, I understand that OLY lifting is important and that it works. So save the hate mail.

I just don’t feel that you HAVE to include them to be a successful strength and/or performance coach. As the saying goes – there’s more than one way to skin a cat.

Maybe even most important of all: I think we can’t be afraid of knowing our own limitations as coaches.

It’s nothing to be ashamed of, nor is it something to cower away from.

It’s as simple as that.”

Why I Don’t Use the Olympic Lifts

“For sprinting and any sports that desire quickness, maximum speed and agility, the triple extensor muscles (gastrocnemius and soleus, quadriceps, and gluteus maximus) are determinant for ultimate performance. The propulsion phase (the push-off against the ground) is crucial. Weak propulsion potential will increase the duration of the contact phase, making the sprinter slower. The stronger the triple extensor muscles, the shorter the duration of the contact phase. Now, the deadlift does not strengthen the calf muscles, for example. It strengthens the hamstrings – which are essential in terms of power and strength in terms of shortening the recovery phase of the running step (bringing the heels up toward the buttocks). But it does not work the triple extensors.

I therefore recommend these exercises for sprinters (and any athletes) that want to become faster and more agile (in this order):

a) Calf (heel) raise.
b) Squats
c) A lift that strengthens the hamstrings, e.g. leg curls

I apologize for my bluntness, but it seems that every now and then some coaches do ‘rediscover the wheel’. Every time an athlete achieves a great performance the trend is to find out what their coach has done? What is the miraculous lift, for example? However, nobody asks about the genetic qualities of the athlete or how the coach has planned the different phases of the training program. There are no miracles when it comes to strength training for sprinters.

On my last trip to the UK in 2006, I realized that strength coaches are too captivated with Olympic weight lifting. Why? Don’t they know that a strength exercise should be selected in regard to how it targets muscles in the way they are used in the sports activity itself?”

A Great Interview with Tudor

“Explosive exercise, including Olympic lifts and variations of these, plyometric-style training, and traditional weight training exercises performed with a very fast cadence, are very popular with athletes, and are advocated by many self-proclaimed experts in the field of strength and conditioning. It is often claimed that such exercises translate better into enhanced sporting performance compared to weight training with a slow cadence. However, as we have shown, there is little evidence that these training techniques are effective in enhancing athletic performance, and no evidence that they are more effective than relatively safe, slow weight training. In fact, some studies suggest that slow weight training may be more effective in enhancing strength and power. Also, there is considerable evidence that explosive exercises pose considerable injury risks: we contend that these risks are ethically unacceptable. As such we recommend that, as supported by the literature, a training regime that encompasses slow, controlled weight training in combination with the sport specific training is all that is necessary to enhance both muscle strength and power and in turn improve actual sporting performance.”

“Many coaches believe that building explosive lower-body power requires performing Olympic lift variations such as the power clean and power snatch. The theory goes that the O-lifts improve rate-of-force development, which transfers to similar movements in the athlete’s chosen sport.

I say it’s not true.

Power, on a neurological level, is a specific skill, one enhanced through specific practice and coaching. And the only training that develops the raw material that can be molded for this specific practice is good old strength training.

To be fast, you must practice the activity at which you want to be fast. Lifting fast or explosively has very little to do with how fast you run, jump, or throw on the track or field.

Any performance transfer that does occur from the Olympic lift variations is due to the strength gains achieved from lifting heavy loads, not enhanced rate-of-force development. In other words, Olympic lifting won’t make you any more explosive than slower tempo, high-intensity strength training.”

Do You Need the Olympic Lifts?

“Olympic lifts are certainly a proven method of developing and improving power production. However, Olympic Lifting has never been a part of the Performance U training approach.

Put simply, we prefer other, less technical weight-training options, as we won’t ever know how much is technique in these lifts and how much is usable power that’s due to the training program.

Plus, as Richard Sorin, Iron game legend and owner of Sorinex Exercise Equipment says, ‘Athletes (or personal training clients) are NOT there to become weight-lifters. They are there to be athletes made stronger and rehabbed in the weight-room.’”

“At seminars, I often poke fun at weightlifting coaches, who love to warn their students that the Olympic lifts are highly technical, requiring years to attain proficiency, let alone mastery. Yet these same coaches will promote the O lifts as the centerpiece of strength and conditioning programs for athletes participating in sports ranging from soccer to water polo.

Methods by themselves are neither good nor bad — it is the application that determines their usefulness. Focus more on results, and release your attachments to pet theories about how things should work. Worry less about how much your athlete can power clean and more about his or her ability to deliver in the playing field. After all, when a plumber fixes a drain, does it matter what type of wrench he used? If not, why should we as strength coaches view our profession any differently?”

Why I Changed My Relationship Status With The Olympic Lifts

“Training to compete on the platform, weightlifting, powerlifting or kettlebell lifting, is not the same as using the power tools of the iron sports to improve your performance in the field, in the ring, or on the mat. If you want to compete in a strength sport – use every legal trick in the book. If not – use the barbell or the kettlebell as a means, not the end. And keep things simple.”

Do You Want to Get Stronger or Lift More?

There’s no denying that excellent results can be achieved with the use of Olympic lifts when training athletes. Al Vermeil, the only strength coach to have world championship rings from both the NFL and the NBA, has experienced great success with the use of Olympic lifts in his hierarchy of training methods (Vermeil’s training pyramid is outlined on page 101 of The Elite Trainer). However, proper equipment and instruction from a skilled coach like Dan John are essential if you plan to perform Olympic lifts in your training.