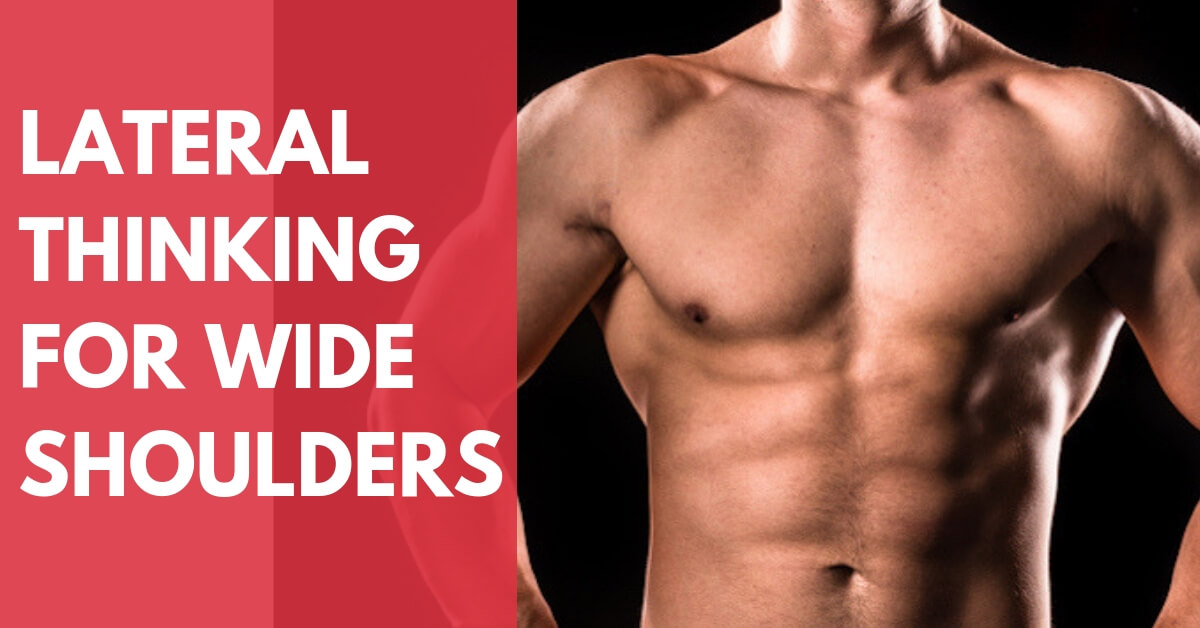 The lateral raise seems like such a simple exercise. How many variations can there possibly be? Well, the answer to that question, as I’ll soon show you, is “Plenty!” Since a recent study has revealed seven segments of the deltoid, not just three, and the ball and socket configuration of the glenohumeral joint allows more motion to occur at the shoulder than any other joint in the body (up to 16,000 positions for the arm), more areas can and should be stimulated (26, 21, 17).

Thus, it’s important to use many different angles when performing laterals if you really want to add some size and width to those delts! Let’s explore some options.

There’s a low percentage of fast-twitch (FT) fibers in the medial deltoid, averaging 36% FT and 57% slow-twitch (25, 4), and according to Tesch and Larsson, “Fiber-type distribution pattern in present bodybuilders tends to resemble the muscle structural profile of endurance athletes. The bodybuilders did exhibit relatively high muscular endurance, which is consistent with the observed low percentage of high-glycolytic, fatigable FTb fibers.” (25)

Yet, paradoxically, the bipennate structure of the medial deltoid with five to seven tendons allows for powerful contractions. These strong, short fibers are less susceptible to intrinsic stretching and display their greatest strength at 90 degrees and are weakest at the upper and lower 15-degree range (6). It’s evident that the shoulders can withstand a high workload since they’re involved in almost every upper-body movement, and they’ll respond to a variety of rep ranges.

Abduction vs. Other Shoulder Movements

When performing a lateral raise, you should always concentrate on the elbows — raising them upward and outward until you reach ear level (2). Although there’s significantly less activity in the medial deltoid and supraspinatus during scapular plane elevation with the elbow bent compared with the elbow straight (due to a shorter lever arm), it’s a good idea to maintain a slight bend to relieve stress on the elbow joints (15).

Keep the wrists straight and firm and, as always, keep the chest up and out. It’s important to maintain a neutral spine and set the scapula through retraction. This transforms the upper back into a rigid, solid platform allowing greater deltoid isolation (3). Use a mirror to check for symmetry when performing a lateral raise with both arms. Actually, some authorities believe that the exercise should be done in this manner so that any compensatory motions can be easily detected (19).

Dale Buchberger, an ART practitioner shoulder specialist, recommends following the scapular plane (scaption) where the forces around the shoulder joint are even, resulting in the least amount of stress on the capsule and ligaments (19). In other words, the length/tension relationship of the shoulder abductors and rotators are optimum in this plane for elevation.

Not only do the deltoid and supraspinatus have a more direct line of pull in the scapular plane (1), there’s also increased of the external rotator muscles (i.e., the infraspinatus and teres minor). Just remember that the scapular plane generally lies 30 degrees anterior mid-frontal plane although it tends to vary slightly among individuals (21).

Okay fine, there may be some benefits to performing the lateral raise in the scapular plane, but really, how bad is the common method? Well, according to Rosenthal, “The lateral raise performed in the frontal plane with the arm extended reduces conformity of the joint surfaces, produces less than alignment of the rotator cuff muscles, and increases the stress on the inferior glenohumeral ligament complex.” (21)

Since the lateral raise is commonly performed with the palm facing down, the internal rotation of the glenohumeral joint can lead to rotator cuff impingement. Generally, the rotator cuff tendons move with minimal compression beneath the acromion when abducting the arm. However, if the arm is internally rotated excessively during elevation and/or raised beyond 90 degrees, the greater tuberosity of the humerus pinches the rotator cuff tendons and bursa against the acromion and repetitive aggravation can lead to inflammation and damage to these structures.

So what does this mean? Well, to minimize compression, don’t go beyond 90 degrees, or try doing laterals with the arms externally rotated where the thumbs are pointed toward the ceiling (3, 5, 17, 21). Never perform an exercise if it hurts, but with some modification – either to the plane of movement, grip position, or range of motion – you should be able to do it without pain.

Neglect any one of the deltoid heads and you’ll develop a muscle imbalance. Usually, the posterior (rear) deltoid is lacking — the classic “rounded shoulders” posture some bodybuilders get is a good example of this.

As Michael Gundill notes, “Bodybuilders have front delts that are on average five times bigger than sedentary people. Their lateral delts are three times bigger and their rear delts are only 10 to 15 percent bigger. That imbalance translates into supraspinatus tendon abnormalities and is a source of shoulder pain.” (7) To hit more posterior deltoid, keep your arm back in the frontal (coronal) plane and use an offset grip (more on that later), or you could bend over when performing lateral raises.

To reduce the stress to your lower back with this exercise, either rest your forehead on an incline bench, lie prone on a high bench (18), or perform the exercise unilaterally (i.e., one arm at a time) to allow the opposite hand to support the body (3).

Having a training partner touch the posterior delts while lifting will help focus attention and stimulate those muscles. Another tip offered by Beth and Oscar Rothenberg in their book Touch Training for Strength is to touch the elbows, then the ears, and ask the exerciser to draw an imaginary straight line between the two points as they lead the lift with their elbows (22).

An excellent exercise for the posterior delt is the bent-over one-arm cable lateral raise (pronated grip) using a rope. Try it and you’ll see what I mean, but start with the lightest plate first.

McMahon et al., 1995 state that a larger contribution of force from the supraspinatus is required near the beginning of motion, whereas the middle deltoid is more important near the end of glenohumeral abduction in the scapular plane (12, 16).

Therefore, side-lying on a bench or Swiss ball will effectively target the supraspinatus since the function of this rotator cuff muscle is to abduct the arm primarily during the first 15 to 30 degrees. This method of training also has important implications for physical rehabilitation of the rotator cuff since it displayed the greatest activation of shoulder muscles compared to other popular exercises while avoiding subacromial impingement (9).

However, in order to truly target the fibers of the medial deltoid, use lean-away laterals where a greater overload is placed on the top of the movement.

Dumbbell lateral raises can be performed standing or seated. Sitting when performing laterals will take the legs out of the movement and help you avoid cheating. However, you may wish to extend a set and the subsequent time under tension (TUT) by first sitting to isolate the delts and then, when you’re completely fatigued and can’t complete an additional concentric rep, standing to get help from your lower body to squeeze out another rep or two.

For regular dumbbell lateral raises, another option is to go to full range of motion (ROM) as recommended by Dr. Michael Yessis. As the arm passes 90 degrees, you must externally rotate the humerus to continue the motion so that the palms are facing each other at the bottom and top of the movement.

According to Yessis, “The deltoid is most active from the shoulder level position to the above-the-head position. Stopping at shoulder level as typically done in the lateral arm raise exercise limits flexibility in the shoulder joints and full muscular development.” (27) However, if rotation during full ROM laterals causes discomfort, only raise the arms to 90 degrees where they’re in a straight line with the shoulders (13). Keep in mind that the serratus anterior, rhomboids, levator scapula, and upper trapezius muscles really come into play above parallel (17).

Ian actually recommends a ROM of 45 degrees below and above parallel to target the medial delts. He advises to “intentionally and consciously aim to keep the upper trap as long as possible for as long a time as possible during all training reps.” (11) Of course, you’ll have to use a lighter weight with this technique, but it works! Try it.

To extend a set and further the TUT, use a dumbbell and rubber tubing simultaneously. When fatigue sets in and you can no longer complete another concentric repetition (in other words, the elbows don’t reach ear level), drop the tube handles and continue with only the dumbbells. I first learned of this method, called the Jettison Technique, in the book MASS! by Robert Kennedy and Dennis B. Weis. The technique can also be used on a number of different exercises, like arm curls and upright rows for example (10).

• The motto “go heavier or go home” doesn’t apply to me since I work out in my basement, but it still holds true for those that go to the gym. (For me, the motto is “go heavier or go upstairs!”) Lateral raises are no different than any other exercise. Weight training is about progressive overload – you should strive to use heavier loads over time. Due to the poor leverage encountered in this movement, small-incremental loading (e.g., using PlateMate attachments) is warranted.

• Since the leverage is poor on lateral raises, bend the arm(s) to reduce the fulcrum (14, 23), which permits a slower tempo of execution since it makes the lift easier (20).

There’s a device called the Deltaforce which accommodates this action; however, you could save money by just supporting a weight plate on your upper arm or simply using dumbbells.

• An offset grip (thumb against plate) will recruit more posterior deltoid. To take this a step further, attach a PlateMate to the rear plate only (closest to your pinky).

• Body position will alter the line of pull. The standing lateral raise actually emphasizes the anterior deltoid. To challenge the middle deltoid, lean forward about 30 degrees (3). The more forward you from that point, assuming that the weight continues to move in the frontal plane, the greater the emphasis on the posterior fibers of the deltoid.

• Another interesting variation of body position is that proposed by exercise scientist Jerry Telle where the body moves from an upright position to a side-lying position during the eccentric action to maintain optimum tension on the delts (23, 24). At first, it may be difficult to execute smoothly, but after a few reps, you’ll get the hang of it.

• Resistance tubing/bands will overload the top ROM and, as mentioned above, greater stress is placed on the medial deltoid.

Cable resistance is even throughout the ROM, whereas dumbbells exert the greatest overload (or moment/torque) when the arm is exactly parallel to the ground.

Okay, let’s put it all together now. Here are some sample programs:

If you want to have trouble fitting through door frames, you need to do lateral raises. And if you want to get the most out of laterals, you need to do some “lateral thinking” and use many different variations of the exercise. Hopefully, I’ve given you enough ammo here to get you started.

14) Lander, J, Rutland, R. How Much Weight Are You Really Lifting? http://www.cybexintl.com/education/perf_training/how_much_weight.html

23) Telle, J. Beyond 2001 – The Next Real Step. New approaches to scientific training for the advanced bodybuilder (Coaches Edition.) Denver, CO., 1998.