I Wear My Sunglasses At Night 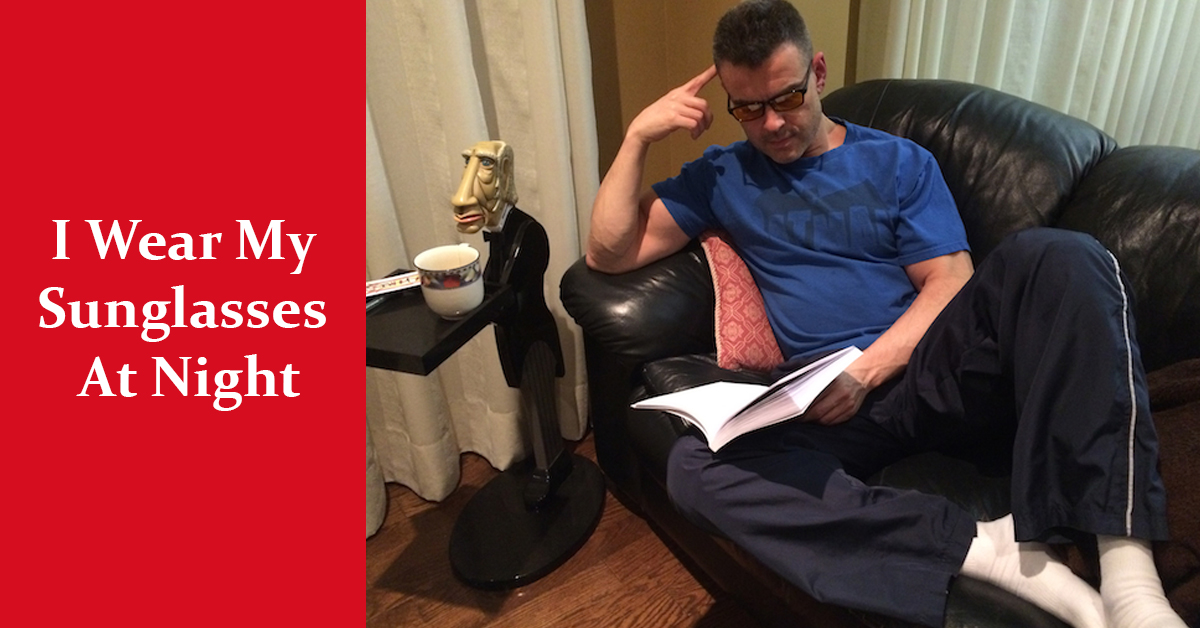 Corey Hart was on to something with his ’80s hit song “Sunglasses at Night.” Believe it or not, it may be more beneficial for your health to wear your sunglasses when the sun goes down than any other time of the day. You see, the sleep-inducing hormone melatonin is influenced by the amount of light that you’re exposed to. The darker it is, the more melatonin you release. Limiting your sunglass use during the day is important so that natural daylight will signal the retina of the eye to inhibit melatonin production, which will make you more awake, alert and energetic. Wearing your sunglasses at night, on the other hand, can make you tired and sleepy, exactly what you want before going to bed.

The most profound effect on melatonin comes from high-energy visible light known as blue light. All sunglasses will block a portion of this light, but some tints block more of it than others. Orange-tinted glasses, for example, block almost 100% of blue light that’s emitted by electronics and energy-efficient lightbulbs. These are the glasses you should wear at night when you’re on your computer, playing video games, using your smartphone, or simply watching television. In fact, if you’re in any room bathing in artificial light after sundown, you should have these things on. There was a time before the invention of the lightbulb when all we had was the dim amber light of a candle or log fire. Now we have bright blue light everywhere! Exposure to blue wavelengths of light can be quite beneficial during the day but very disruptive at night.

In the book Sleep Thieves, author Stanley Coren indicates that the number one “thief” of sleep is the lightbulb. (By the way, next on the list is working the night shift.) T.S. Wiley and Bent Formby concur with Coren as reflected in the title of their book, Lights Out. They believe that electricity and the use of the lightbulb around a century ago is a point of no return in human history. In fact, Wiley and Formby consider artificial lighting as “a new kind of extinction,” and they suggest that light contamination during the dark phase of a day-night cycle may “adversely affect your life expectancy.” There’s evidence to back them up (see Dauchy et al., 1997 and Dauchy et al. 2010).

Yet with that said, most people are suffering from light deprivation during the day. In Powerful Sleep, author Kacper Postawski contends that high-intensity light is important for high-quality sleep. According to Postawski, if you expose yourself to light during the day, your body temperature rhythm will “peak” at a higher point and will fall at a later point, and thus you’ll experience better sleep at night. However, if you get inadequate daylight exposure, your body temperature will be closer to “flatlining” which prevents quality sleep and lowers your energy levels throughout the day.

Take-Home Message: During the day, get as much natural light as possible: open all the blinds as soon as you wake up, get outdoors as much as you can, limit sunglass use only when absolutely necessary, and if you work indoors, use full-spectrum lighting. At night, limit light exposure onto your skin and into your eyes: wear orange-tinted glasses (also known as blue blockers), shut off electronic devices after 9pm (read an old-fashioned book or take a salt bath instead), and sleep in a room that resembles a cave!