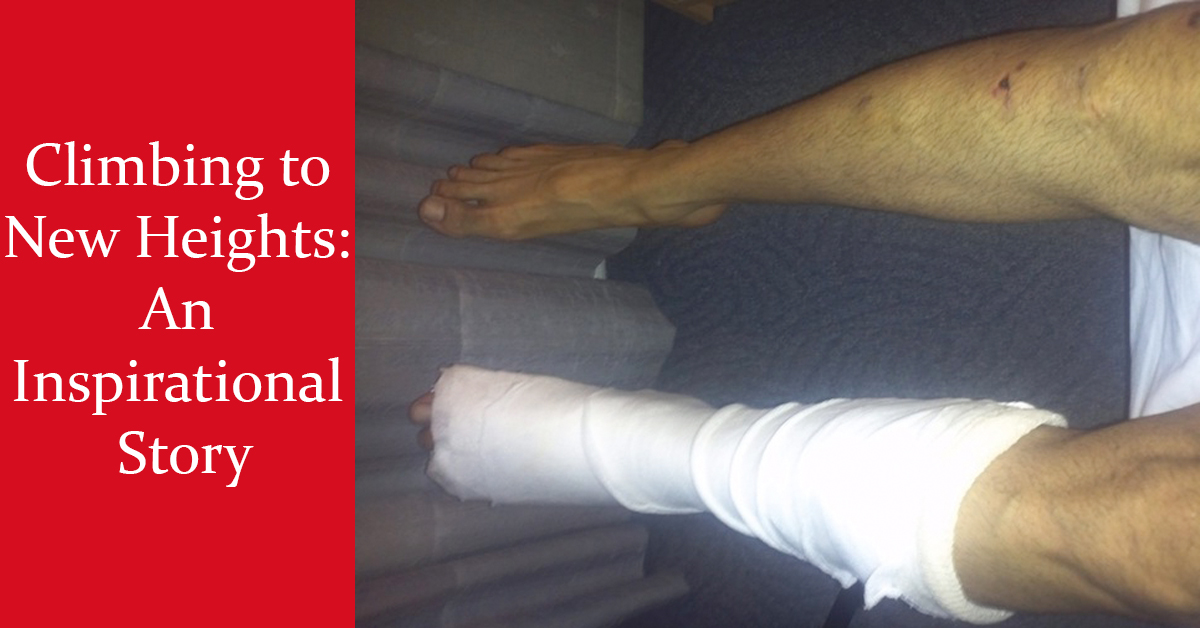 We all experience injuries in life. The minor ones are usually no big deal – you make a few revisions to your training, give it a bit of time, and things typically return back to normal.

Then there are the major injuries that require surgery and far more time and effort to get back to normal, if at all possible. Often, there is a period during rehabilitation where the situation appears dire and bleak. Getting back to normal does not seem likely, but if you persevere and put in the time, there are sure to be brighter days ahead.

My client, Arzhang, experienced a major injury not too long ago during a fall that almost claimed his life. Through sheer determination and a relentless work ethic, Arzhang got back into fighting shape and is now ready to set some new personal records.

On December 2013, I went on an expedition to Mt. Aconcagua in Southern Andes, the tallest peak on the southern hemisphere standing at about 23,000 feet (7,000 meters) from sea level. So many spectacular sceneries mixed with the smell of raw nature made it very hard for me to resist the temptation. I had to climb this mountain!

The climb was exhilarating. I enjoyed the physical challenge and the scenery was truly breathtaking. It was everything I imagined it would be and more, but on the way back, things quickly changed.

I experienced a horrible fall, one that involved significant self-rescue, hours of crawling, tears, pain, and finally getting airlifted to the base camp. During the fall, I completely shattered three of my metatarsal bones in my right foot, a condition known as a Lisfranc injury.

On January 2014, I underwent surgery and had my metatarsal bones fused using a metal plate and screws. I was told by the surgeon (and later by the rehab staff) that I may never be able to walk normally again and may be limping for the rest of my life.

Comprehending such an outcome for someone like me, who has always been playing sports, working out, biking, climbing, and a true disciple of a health and fitness lifestyle, was devastating. I found myself completely empty and helpless. I could not imagine being like that for the rest of my life. It was a challenge that I would have to deal with, fight with, and overcome.

Since I had to be in a wheelchair for at least four months, the first thing I did was to get a Chair Gym so that while in a cast, I could train my upper body and slowly do some stationary light training for my lower body.

During this period, I did extensive research on natural foods and supplements that promote recovery of broken bones. Unfortunately, the doctors and health professionals that I met during the early stages of rehabilitation did not provide this information to me.

Indeed, this helped me with a faster recovery. However, once I was out of the cast, I was still not able to walk for a couple of weeks. I knew I had to up my game.

Following the advice of my great chiropractors, I started to moderately train three hours a day focusing on basic movements of walking. I felt like a newborn trying to learn how to walk again. I knew the whole point was not to give up, and I did not!

After one month, I started to slowly walk, but I was still limping significantly. It was at this point that I got the clearance to do a full one-rep bodyweight squat, and yes, that was one of my main goals, to be able to do one bodyweight squat again! It was a dream come true to accomplish that goal after months of pain, sorrow, dedication, and perseverance.

I knew it was time to get back into the gym for some serious training, so I gave John Paul a call.

I wanted to share my experience with you hoping that it will inspire you in some way. You owe it to yourself to do research and seek the guidance of experts that can truly help you. The motivation, however, must come from within. No one else can do that for you.”

Arzhang’s story demonstrates that when a major injury occurs and you fall to a low point in your life, you can climb right back up and reach new heights. The body goes where the mind tells it to!

Arzhang had a goal of squatting with two 45-pound plates on each side of the bar. In fact, he wanted to do 10 sets of 10 reps with 225 pounds. When he first came to me shortly after getting his cast removed, his leg had experienced significant atrophy and he could barely do an unsupported step-up with one aerobic step, let alone a weighted back squat.

At the beginning, he was coming here 4-5 times a week. Now keep in mind that Arzhang worked and lived in downtown Toronto. The commute to my place in Richmond Hill during rush hour is at least an hour. He did the drive for months, coming to see me on a weekly basis for the first year. Thereafter and to this day, I write his programs and he sees me on a monthly basis.

I’m happy to say that Arzhang is 20 pounds shy of his ultimate goal, doing full tempo-controlled “butt-to-heals” squats for 10 sets of 10 reps. He should reach his goal when we return to this type of training in a couple of months, and come the new year, I’m sure Arzhang will reach yet another milestone.

As Nelson Mandela once said, “After climbing a great hill, one only finds that there are many more hills to climb.”