Are Chin-Ups A Natural Movement? 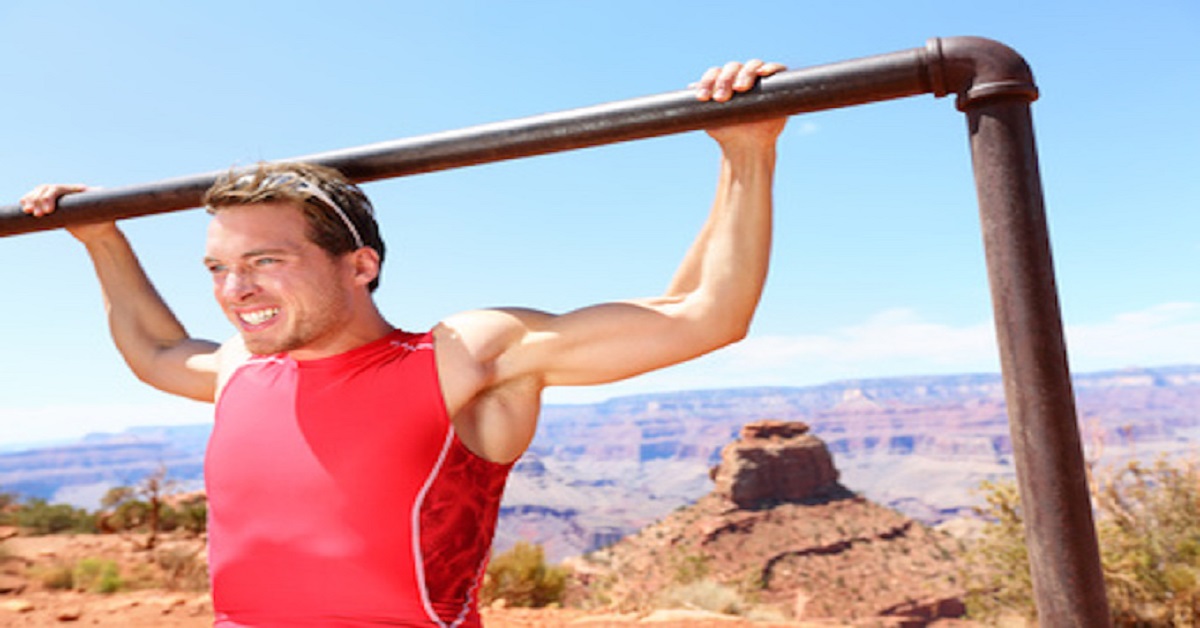 For years we’ve been told to avoid behind-the-neck pulldowns and pull-ups. They place a tremendous amount of stress on the shoulders when lifting a heavy load with the humeri abducted and in a position of maximum external rotation. It’s a problem waiting to happen.

Furthermore, it’s not a natural movement. We’re not really meant to pull things behind our head in that manner, nor do we ever have to in our lives. Even in the animal world, you don’t see monkeys pull themselves up like that. They know it’s not natural!

At least a behind-the-neck press may be performed some time in life. There may be a situation where you have to carry a log, yoke, wood/steel beam, or even an animal across your shoulders and then press it up. It can happen and I’m sure it does every once and a while.

As far as biomechanics and safety are concerned, the head of the humerus is not jammed against the acromion when you press like it is when you pull behind the head (which can lead to an impingement syndrome). So assuming that you have adequate range of motion to perform the movement properly and it doesn’t give you any discomfort, the occasional press behind the neck may be a suitable option.

If I ask you to raise your arms up over your head, your palms are either facing forward or each other. I guarantee that they’re not facing back! And if I review your training logs for the past say 5 years (and I know that every serious trainee is smart enough to have a training log), I’m sure that I’ll see a variety of overhead presses using various implements and grip widths, but the grip orientation will always be either pronated or neutral.

So the question is, why do we perform supinated-grip chin-ups (or pulldowns for that matter) if they’re not a natural movement?

The obvious answer is to build muscle. Performing chin-ups or pulldowns in this manner is a great way to build biceps, delts and lats, not to mention the effect it has on the core, but at what expense? Are we compromising the health of our elbow or shoulder joints doing them in this manner?

Should we stick to a more natural pronated or neutral grip with these overhead movements, and use a supinated grip solely on movements that feel more natural with that particular grip like rows and curls? After all, a reverse-grip row can be coupled with a reverse-grip bench press and any supinated arm curl can be coupled with a reverse-grip pressdown, but there’s no true antagonistic movement for a supinated-grip chin-up. That alone should set off a red flag. A muscle imbalance is sure to occur if you do enough of them!

Why do I suggest that it’s more “natural” to do pull-ups or pulldowns with a pronated grip and arm curls with a supinated grip?

Don’t get me wrong, I love chin-ups. I’ve done them all my life and I got pretty strong at them (I could do chins with an additional 100 pounds around my waist in strict form), but I’ve also had problems with my elbow and shoulder joints. I’ve injured my biceps on both ends – the proximal end (both sides) and the distal end (left side) – and it makes you wonder if the chin-up was a contributor?

No matter how hard I’ve been pondering that question, I continue to do chin-ups. It’s hard to give them up because the positives still seem to outweigh the negatives. However, I place less emphasis on them in my training rotation, which looks something like this now:

Each phase is a month’s worth of training. You’ll see that I still perform a supinated-grip chin-up but only twice a year. The bulk of my pull-ups or chin-ups are performed with a pronated or neutral grip, which reflects my overhead pressing patterns. Pushing and pulling in this manner is a good way to maintain muscle balance around a joint.

We’re always quick to modify presses or remove them altogether if they’re giving us a problem, but rarely do pulling movements seem to be the culprits. Sure, if it hurts, don’t do it… but what doesn’t hurt you now, may hurt you in the future! Balance between pressing and pulling movements is important, but make sure you take into consideration the grip orientation as well.