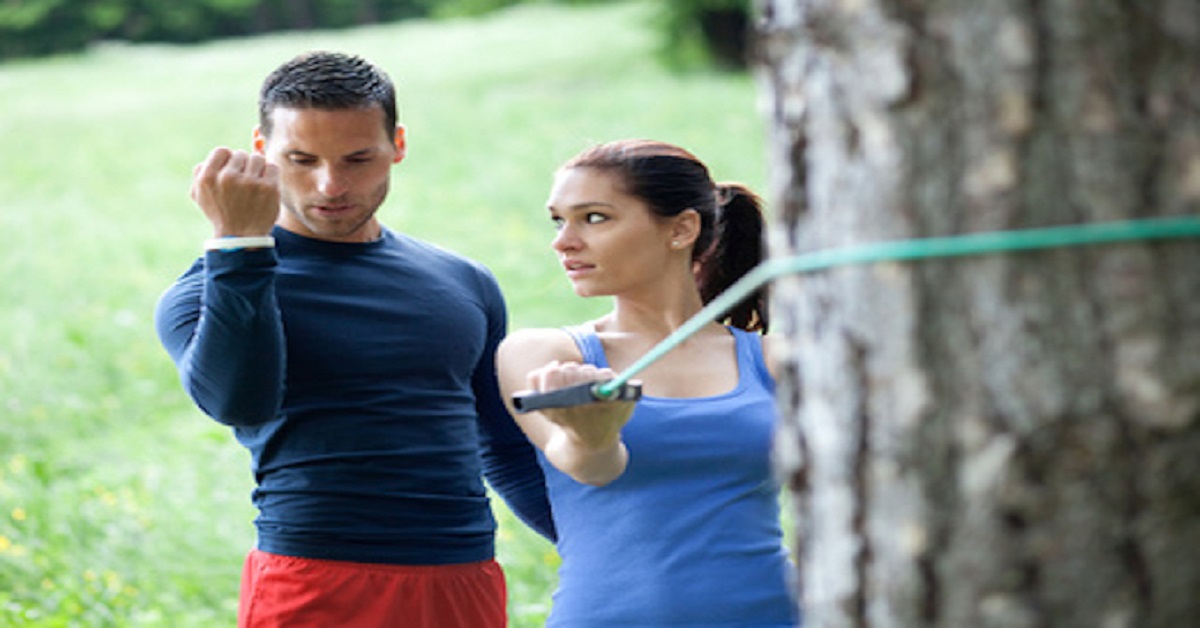 Today, there are more training tools available for personal trainers than ever. How do you decide what equipment is best to use? Well, that really depends on the situation.

Let’s take resistance training, for example. As far as I’m concerned, free weights reign supreme! Every time I’m asked what I think of this machine or that machine, my response is always the same: Get yourself a simple barbell and dumbbell set with an adjustable bench and forget the rest. Period.

Many trainers find themselves in a situation where space and budget are limited though, and free weights may not be the best option. Remember, resistance can come from many different sources.

One such source that is quite popular in the field of personal training involves resistance tubes and bands. These are portable devices that are relatively inexpensive and quite versatile. You can perform just about any exercise with these things and they even come in different resistances (they are usually color-coded for this reason).

With so many benefits resistance tubes/bands seem like the perfect training tool, except for a slight problem: If using elastics and one end is fixed, it creates resistance patterns that do not ideally match the torque-joint angle curves of your body because the bands increase resistance fairly linearly throughout the range.

Well, the answer to that is simple: Elastics encourage the disproportionate development of accelerators versus decelerators and that can lead to injury (visit this link for a visual demonstration). In fact, out of 16 cases of rotator cuff tendonitis reported a few years ago by the national synchronized swim team of Canada, all but one case were corrected by eliminating tubing and using dumbbells instead.

Resistance tubes and bands are quite popular in the rehabilitative setting to train the rotator cuff muscles, but obviously, there is a big difference between using dumbbells and elastics.

This is where the concept of accommodating resistance applies and it is so versatile with a tube or band – it can be used on almost any exercise!

The Concept of Accommodating Resistance to the Rescue

Here is a little trick I learned from the late Dr. Mel Siff. Basically, the concept is simple: Use a resistance tube or band and have a partner follow the movement pattern to accommodate strength (i.e., give more or less resistance when needed). Just remember to keep the movement smooth. When applying passive resistance, it’s not a competition!

That’s all there is to it.

With this novel technique, a serious flaw of training with elastics is rectified. All of a sudden, more pros and fewer cons!

Holistic Health Practitioner and Neuromuscular Therapist, Paul Chek, has a famous motto: “First Isolate, Then Integrate!” So with that said, let’s start with some isolation exercises.

Isolation Exercise for the Subscapularis Muscle

Some authorities feel that the subscapularis is the missing link to unlocking the true strength of the upper extremities and improving shoulder strength and health. Many therapists often claim that this muscle tests weak and should be subsequently trained. Well, the reason for this is due primarily to poor posture, or more specifically, rounded shoulders (i.e., a kyphotic posture) that is so prevalent in today’s society. This is a case of a tight and weak muscle.

Due to an extreme amount of internal rotation, the subscap (an internal rotator of the humerus) becomes extremely tight and facilitated. Since the sarcomeres (actin and myosin) experience full interdigitation, it becomes difficult to contract any further. Therefore, in order to strengthen these fibers, they must first be placed in an optimum position to contract effectively – you accomplish that goal with appropriate stretching and myofascial release (e.g., A.R.T.) Only after this is accomplished should the subscapularis be trained with resistance.

The following exercise will help isolate this muscle.

Isolation Exercise for the Infraspinatus Muscle

Another muscle that tests weak is the infraspinatus, an external rotator of the humerus, but for different reasons than above. It is usually long and weak – the actin and myosin filaments are not in an optimum position for maximum force output. This particular rotator cuff muscle has appeared often in recent literature due to the lack of shoulder external rotation in many strength training programs creating a muscle imbalance.

Robert Lardner, a European Physical Therapist trained by among others Janda, reveals an interesting concept for rotator cuff exercises:

To grab a dumbbell requires flexion of the arm muscles. The flexion muscles are so strong that these phasic (flexion) muscles will override the extensor (tonic) muscles. So all the guys lying on their sides are really doing mostly a bicep/brachia movement. So, what is the proper way to exercise these muscles? The best way is to have your hand open with your fingers spread and have the resistance strapped to your wrist, either through a rubber band or a cable. Then go through the extending motion that you wish to exercise.

It may indeed be more effective to perform many of the exercises listed in this article with an open hand. Try it and see if you can notice a difference.

Proper Execution of the Pullover Exercise

Let’s move on to another common shoulder movement, the pullover. Many trainers prescribe this exercise to correct winging scapulae. Guess what? That is the wrong approach!

In order to effectively remedy this situation, the serratus anterior, rhomboids, and middle/lower trapezuis should be trained. The pullover does not effectively target these muscles. In fact, it targets the specific muscles (particularly the latissmus dorsi and subscapularis) that can cause winging scapulae (Polquin, 1997).

Furthermore, the dumbbell pullover is often performed over a bench. This method is inviting an abdominal hernia as well as overstressing the shoulder joint (especially if the trainee has tight shoulders).

A far better approach is to perform the exercise on a decline bench or on the floor as depicted below to avoid maximum overload on the shoulder joint in extreme extension. In other words, by shortening the range of motion, it is safer for your shoulders.

Also, avoid excessively arching your back by pressing your spine into the bench or floor and keeping your core tight throughout. Hence, your abdominals must act as stabilizers during the movement.

Proprioceptive neuromuscular facilitation (PNF) patterns are a series of movements developed by Herman Kabat and featured in a classic text by Knott & Voss. Although many trainers and therapists perceive PNF as a form of stretching, it is much more than that – it involves a series of spiral movements that cross the midline of the body. In doing so, all planes are crossed: vertical/horizontal extension/flexion, abduction/adduction, and internal/external rotation occur in one movement.

By using accommodating resistance with bands and tubes, you remove a major flaw associated with elastic resistance to provide more even resistance throughout the range of motion. Instead of a rather inferior training tool, you now have a potent weapon at your disposal!