A Universal Language for Strength Training 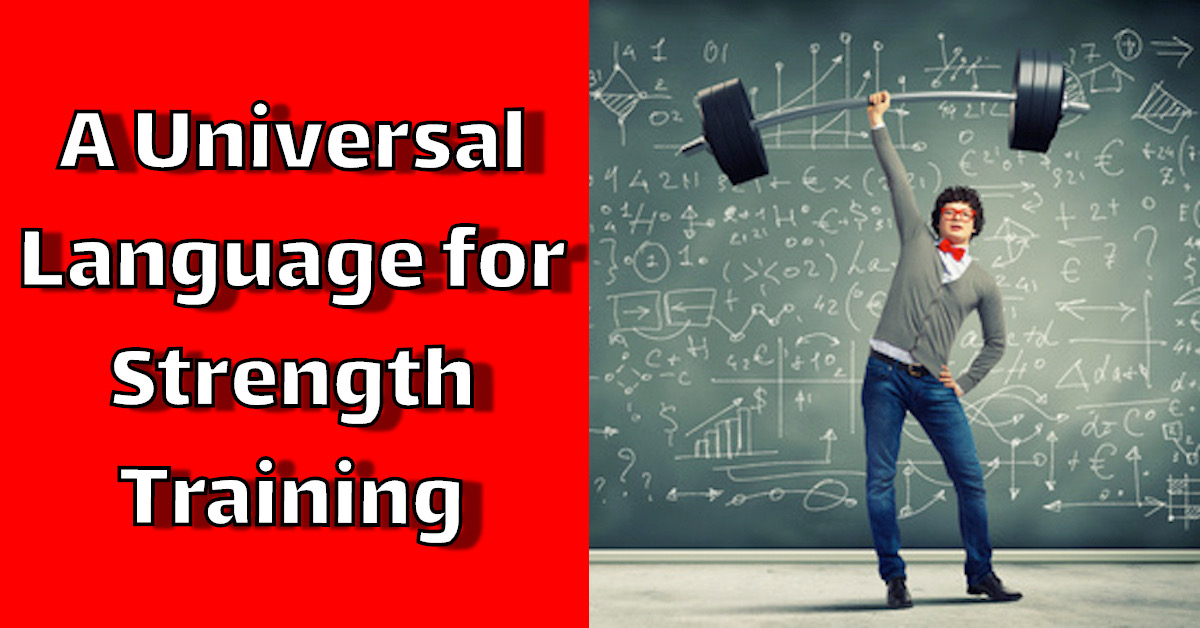 Much like writing software or music, a universal language of program design is required for strength training. Trainers need to have a consistent prescription format in order for trainees to obtain consistent results. Your program may be exceptional, but a haphazard interpretation will lead to haphazard results. To remove the variability, specific training parameters must be defined. This is the system that I propose to maintain consistency among practitioners.

Strength training programs should be listed in the following manner:

Double station training, e.g., A1, A2, B1, B2, C1, C2, D1, D2 – Perform one set of the “A1” exercise, then one set of the “A2” exercise, and repeat until the prescribed number of sets for each of the two exercises are completed. Follow the same process for the other exercise pairs.

Generally, a detailed description is given for each exercise, although there are some exceptions. For instance, a standing mid-stance heels-flat barbell back squat is simply known as a back squat. The same concept applies for a front squat except, of course, the barbell sits across the shoulders in “front” of the neck instead of behind it. Bent-knee and semi-stiff-leg deadlifts are conducted with a mid (clean) grip and shoulder-width stance unless otherwise indicated.

Exercises such as leg curls/extensions and calf raises should be performed with the feet roughly hip-width apart and in a neutral (straight) position unless otherwise indicated.

There may be some exercise names that sound foreign, such as a Sicilian crunch, Zottman curl, tiger bend push-up, dragon flag, and so on, but over time these will become common strength training terms.

The number of sets is typically listed as a single digit, although a double-digit number may be prescribed in some high-volume (e.g., 10 sets x 10 reps) and high-intensity (e.g., 12 sets x 3 reps) protocols. If a range is indicated, it’s best to perform the lowest number of sets the first workout and add one set per workout until the highest number is achieved. Also, just as a side note, although a certain number of sets are prescribed, that doesn’t mean all those sets are conducted. If there’s a significant drop in performance (e.g., 3 reps or more from one set to the next), then you should finish that exercise for the day even though all sets may not have been completed.

The number of repetitions should be listed as follows:

Specific number, e.g., 6 – Select the appropriate load that will allow you to reach momentary muscular failure at the prescribed number of repetitions. The load may need to be adjusted over sets to stay at this figure.

Range, e.g., 10-12 – Select the appropriate load that will allow you to reach momentary muscular failure within the prescribed repetition range. The load may need to be adjusted over sets to stay within this rep bracket.

50X0 – Take 5 seconds to lower the weight, no pause, explode the weight upward under control, no pause, and then immediately begin the next repetition.

3210 – Take 3 seconds to lower the weight, pause for 2 seconds in the stretched position, 1 second to raise the weight, no pause, and then immediately begin the next repetition.

2011 – Take 2 seconds to lower the weight, no pause, 1 second to raise the weight, pause for 1 second in the contracted position, and then immediately begin the next repetition.

The rest interval should be listed in seconds as a specific number (e.g., 90s) or a range (e.g., 30-60s). If “10s” is specified, move swiftly from one exercise to the next – it should take you exactly 10 seconds from the end of the previous set to the beginning of the next set. Similarly, on unilateral exercises such as a split squat or one-arm row, take 10 seconds to rest between the completion of one side and the start of the other side. Make sure to begin with the weaker side first. If no rest is listed, then it means that you’re performing only one set of an exercise and there are no exercises following it.

Strength training program design must be treated in a professional manner with a consistent prescription format among practitioners. It is important to detail and control as many variables as possible in order to gauge whether a program is truly successful. In addition to the sequence, exercise name, and number of sets and reps, tempo and rest interval are two often-neglected parameters that can have a significant influence on the training effect and should be included in every program. Following the system outlined above will ultimately lead to more consistent interpretation and results for your clients.