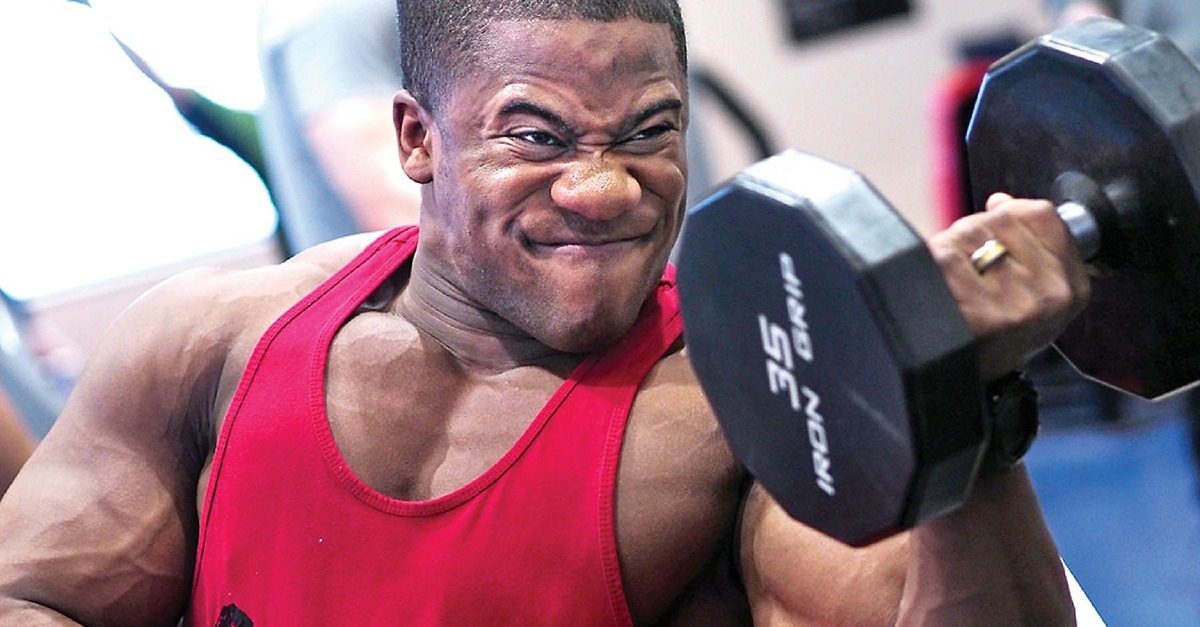 Give a guy a set of dumbbells and tell him to curl them. Without even thinking about it, he’d grip those dumbbells right in the middle of the handles and with his palms facing upward, he’d go at it. Now, tell him to lay back and press them, and I guarantee you that his palms are facing forward while he’s doing it.

That’s pretty much the norm for those two exercises, almost as if it’s set in stone. But what if you rotate the grip a few degrees. Instead of the palms facing upward or forward, what if they faced each other? Or what if you offset the grip by a few millimeters so that you’re not gripping the handles right in the middle? Or what about using an “open” grip rather than trying to crush the handle every time?

Would these slight adjustments make a difference?

Here are seven advanced exercise modifications to break the mould:

Start With A Neutral Grip

A dumbbell press is often performed with a pronated (palms forward) grip. To maximize the range of motion, try the following suggestion: start the press with a neutral (palms facing each other) grip – your arms should form a “W” at the bottom of the movement. Then, as you press the dumbbells upward, rotate your thumbs in so that you end up with a pronated grip at the top of the movement.

There are three advantages of using this type of movement pattern:

a) The neutral grip at the bottom allows for a greater range of motion and is a much safer position for the shoulder. Try this: position yourself on the bench with a pronated grip as you normally would for a lying dumbbell press. Then, rotate your thumbs outward to achieve a neutral grip. What happens? Your arms should sink a bit deeper and you should feel a greater stretch across your chest.

b) Since the pectorals horizontally adduct and internally rotate the arms, by going from a neutral grip at the bottom to a pronated grip at the top, you are performing both functions of the pectoralis major in one movement.

c) Since this particular movement pattern is uncommon to many trainees, it will provide a variation, which may be necessary for continued long-term progress.

The concept of hyperextending the wrists during biceps curls was crowned as an “advanced technique” in the book Touch Training For Strength by Beth and Oscar Rothenberg and reinforced by strength coach Charles Poliquin in many of his writings. This method serves two purposes:

a) By stretching the wrist flexors, you reduce their involvement thereby increasing the activity of the elbow flexors.

b) At the top position, there’s still tension on the elbow flexors. If the wrists are straight, the load would simply be transferred straight down and tension on the working muscles would disappear.

The problem with this technique is that many people experience wrist pain. Well, there’s at least a free weight solution to the tension issue – it involves the kettlebell. As you can see in the photo, the position of the kettlebell is away or the forearm – it always tries to pull your forearm down into extension so there’s constant tension throughout the entire movement. There’s no strain on the wrists since they’re straight throughout, and compared to cables, kettlebells occupy a lot less real estate if you train at home!

If you extend the wrists back on neutral-grip dumbbell flyes, it will have a similar effect as above, i.e., increase tissue stretch, decrease activity of the forearm flexors, and maintain constant tension on the muscle (in this case, the chest), but again, wrist pain may be an issue with this technique. Kettlebell flyes are a nice alternative.

Use An Open Grip

Now, let’s go back to curls for a second. Fat-bar training has been gaining popularity over the past few years, and rightfully so as it will increase grip and overall strength in short order. You can purchase training tools to create a wider/open grip, such as the TylerGrip, Fat Gripz, EZ Grips, or even the new Grips FEAR attachments which look pretty cool… or use kettlebells but not in the traditional manner. Instead of using the handles, grasp the cannon part of the ‘bell and curl away. You can only perform supinated (palms up) curls with this method, but what a great feeling! Try them standing, seated, in an position, or on a preacher bench. Any way you go about it, I think you’ll quickly agree that “ curls” are a great movement!

One word of caution: always implement thick-grip work slowly and gradually. It never fails. Guys purchase one of these attachments and then wait by the door for it to arrive (almost as soon as they hit return!) The mail arrives (usually only days later if they’re in the States or years later if they’re in Canada!), they tear open the box and then rush to the gym to try ’em out on anything they can get their “hands” on. And what happens only days later: it’s called tendonitis, and it takes a while to heal! Don’t be overzealous. Be a tortoise with these things, and you’ll win the race over time!

An effective technique to increase the activation of the short (medial) head of the biceps during arm curls is to use an offset grip (sometimes referred to as an “off-center” grip). The same principle can be applied when performing lateral raises. By using an offset grip where the thumb and index finger are positioned against the front plate of the dumbbell, greater recruitment of the posterior (rear) head of the deltoid occurs.

A common instruction for this exercise is to pronate the arms while raising the dumbbells similar to pouring a pitcher of water, but this can lead to subacromial impingement or your shoulders to hurt over time (check out my article Lateral Thinking for Wide Shoulders for more information). However, by slightly adjusting grip position are facing dumbbell, one can effectively alter the loading without adjusting the mechanics or motion in any way.

In simple terms, the back end of the dumbbell becomes a little heavier forcing the back part of your shoulders to work a little harder! Typically this area is very weak in most individuals and requires greater attention – balanced shoulder development and strength will improve stability thereby enhancing the integrity of the joint and decreasing the likelihood of injuries, and perhaps more important to you, will help build bigger and fuller deltoids. It will give them more of that “3-dimensional” look.

To take this concept a step further, attach a PlateMate to the rear plate only (closest to your pinky). This will make the back end of the dumbbell even heavier.

Roll Towards The Big Toe

As opposed to the standing calf raise, magnetic resonance imaging (MRI) indicates that foot position doesn’t change muscle action in the seated calf raise, but this little trick will work whether you’re standing or seated. Give it a shot!

A single-leg squat is basically a rear-foot-elevated split squat with the rear foot resting on a high surface like a bench rather than a step. It’s a great exercise to really stretch out the hip flexors, but you can heighten the effect by extending the arm on the same side as the elevated leg and holding a weight. I call this the “statue of liberty” squat.

Again, a kettlebell works quite well for this, and to really impose a stretch on the entire fascial line, place the top of the foot on the bench (where your shoelaces are) and cock back the elevated wrist. It may not correct years of sitting a third of the day away, but it sure won’t hurt to try (actually, it may hurt a bit!)

During squats, raising the heels on a 2×4 piece of wood, two weight plates, or a wedge (rocker) board can direct more stress to the quadriceps and help guys with tight hip flexors and calves go deeper and stay more upright. Anyone that lifts regularly should know that, but how about this little trick?

Elevating the forefoot on semi-stiff-leg deadlifts or good mornings will encourage the weight over the heels and increase the stretch on the calves and hamstrings. Check out the “butt punch” exercise I mentioned in my article The Heavyweight Lifting Match many moons ago.

If you do the same things over and over again, you’ll get the same results. Sometimes a change is in order. It doesn’t have to be drastic – even a slight change, like how you grip the dumbbell or roll over your toes, can be enough to stimulate some new results. In other words: sometimes you need to break the mould to break out of the mould! Now go to it and make it happen.